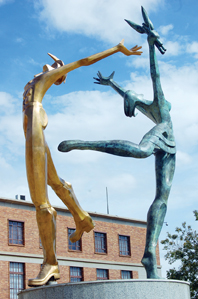 Klerksdorp Record, Klerksdorp - The postponement of several council meetings since last week could mean that Matlosana Municipality stands a chance to lose a R71 million government grant.
Matlosana Municipality’s first council meeting in chambers since the start of lockdown was disrupted on Wednesday 30 September by members of the public who stormed in the council chamber and caused chaos leading to the meeting being postponed.

On Friday 2 October, security at the meeting was so tight, whereby the public and the media were not allowed inside as the gates were also locked.

A high number of police and municipal security monitored the situation outside the building, while at the main entrance, the municipal traffic officers and the private security did not allow anyone inside. Most of the municipal officers knocked off early around 13:00 as the meeting started at 14:00.

Speaking to DA Caucus Leader, Cllr Elmarie Postma and EFF Regional Secretary Cllr Buti Shuping after the meeting, they confirmed that the council meeting took place and that the Special adjustment budget and R71 million grant from the Provincial Government were on the agenda.

“The provincial government placed special conditions that needed to be adopted by Matlosana to receive the R71 million. Amongst this was that there must be compliance to stringent cost-containment measures, payment arrangements with creditors such as Eskom and Midvaal and that there must be a revision of the municipality to ensure it adopts a funded budget,” Cllr Postma said.

Postma said the provincial government also stipulated that this budget must be adopted by 30 September.

“When the item of the budget came, the ANC decided that they would not discuss that, but postpone it to the next council meeting. Their reason for this was that they needed time to study through the document.

“The DA objects to this delay tactic by the ANC to adopt the R71 million grant. The ANC is merely stalling until a new leadership comes into effect. The provincial government clearly stipulated that this budget must be adopted by 30 September and these delaying tactics by the ANC risk making Matlosana lose the grant money which it needs to improve service delivery,” she added.

Postma believes that the ANC is playing political games and risking a delay in bringing service delivery to the people of Matlosana.

Speaking to Washington Ntozini who said he is still Speaker even though the provincial executive committee of the ANC recalled him last month, said: “The reason why we decided to postpone the meeting on 30 September, it was because of the people who stormed inside the chamber, so we had to stop.”

Asking him about any challenges of these postponements he said: “Normally, municipalities have to adopt on the 30 September, but if you fail with reason, you then report to the provincial government.

“On Friday 2 October, we postponed again because we were not aware that the Executive Mayor Maetu Kgaile was not present as she was sick, so we’ll sit again this Friday (9 October).”
On Friday 9 October the council meeting was postponed yet again.