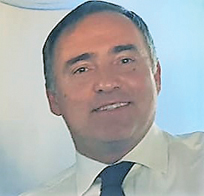 Klerksdorp Record, Klerksdorp - One of the city’s respected businessmen and a member of the Portuguese community passed away while on holiday in the Garden Route.

According to Monica Pestana, her husband, Jose, was deep sea fishing at Struisbaai on 11 February when he suffered a heart attack while on the boat. “He died instantly. He was with his two sons,” she told Klerksdorp Record. He was 54 years old. Jose Pestana was the owner of Hyper Meat for the last 16 years.

“He had a heart attack 20 years ago, but he was looking after himself; going for regular checkups. Everything was fine. This was so unexpected,” she said.

She describes her husband of 29 years - it would have been 30 in April - as a “loving father, good provider and he always made time for family time”.

“He was a loved man. I have been receiving messages of condolensces from people I don’t even know,” she said.

She assured all their clients that it will be business as usual at Hyper Meat, but added that her husband’s big smile will be missing.

Mauro Maddonni, a friend, paid tribute to Jose on Facebook: “With heavy hearts we mourn the loss of a great man... Jose you were a legend Pa! The staff and management of Dante’s Pizza will miss you. This is a huge loss for Klerksdorp.”