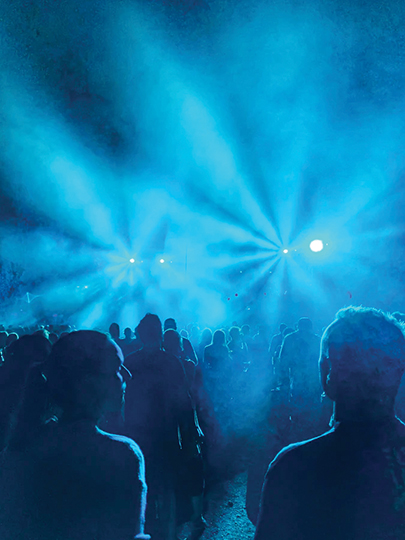 Klerksdorp Record, Klerksdorp - Under the current adjusted level 3 regulations of the Disaster Management Act an outdoor function may only have 100 people maximum attending. Are these regulations enforced or do they only apply to certain people?

That is the question that needs to be answered after Goodfellas Nite club closed off a part of Siddle Street in the CBD over the weekend and hosted a street party celebrating Spring.

The music was so loud that it was even heard as far as Neserhof and Oudorp.

A concerned citizen and member of the hospitality industry drove past the club on Saturday 4 September and was stunned to see that the street was closed and that “hundreds of people” were attending a party. She asked to remain anonymous as she fears victimisation. According to her, a huge white marquee tent was erected in the middle of the road and the street was packed with partying people. “It looked like the street festival of old,’’ she said.

Her questions led her to Klerksdorp Record and she asked how the owners managed to get permission to have a party on this scale seeing the lockdown level the country is currently on. “I drove past after 21:00 and it was packed with no one wearing masks,” she said. She also saw a police van drove passed without investigating.

Working in a restaurant herself, she said they had the police at their restaurant at 20:30 warning them to make sure customers leave at 21:00 and to be locked at 22:00 due to curfew. Yet, driving past Goodfellas, there was no sign of people being told to go home due to curfew. “Is this the case that the law once again only applies to certain people?’’

Upon enquiry by Klerksdorp Record, the local police Commisioner, Brig Neville Seymour, said Goodfellas had permission for the party and that Matlosana Municipality approved the venue and street closure. “They met SASRIA (South African Special Risk Insurance Association) requirements and the event was deemed low risk,” he said.

Sgt Amogelang Malwetse, police spokesperson, also confirmed that the police received no complaints and no incidents were reported.

However, according to regulations it is an offence to not comply with the Disaster Management Act and the owner or manager as well as people who attend can be liable to punishment. This leads to another question of whether the police only act once a complaint is received or can they act when they see the law being broken?

According to Col Adele Myburgh, provincial spokesperson, the police can act when they see regulations ignored.

She, however, added that the police wouldn’t have interfered as the event on Saturday September 4 was sanctioned by the police.

Klerksdorp Record tried to contact the new owner of Goodfellas but was told Dino Ndlovu is overseas and could not be contacted for comment.