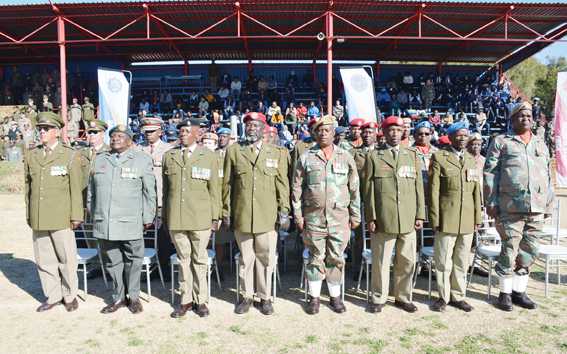 Lentswe, Potchefstroom - The South African National Defence Force (SANDF) honoured those who served the army with loyalty and dedication on Friday 12 July.

The Chief of Defence Intelligence Lt Genl Jeremiah Nyembe, on behalf of the Chief of the South African National Defence Force Genl Solly Shoke, handed out various service medals to deserving members of the SANDF.

This medal parade was for members who served for more than 30 and 40 years. Addressing the recipients, Lt Genl Nyembe said he believe that the task constitutes the greatest honour, that can be assigned to any individual officer.

Nyembe told recipients that he have no doubt that they deserve the accolades because they are a rare set of individuals, soldiers and comrades-in-arms, who have dedicated their lifetime in service of their nation.

“A medal parade provides us this distinct opportunity to recognise and acknowledge members of the SANDF who have rendered long service and good conduct.

“We do this on behalf of the government and the general citizenry of our country, who may not necessarily be aware of the service of the members being awarded.

“Historically, the military medal is awarded to an individual as a mark of honour signifying the individual’s meritorious service, heroism and outstanding achievement during their career as a military practitioner,” he added.

The Chief of Defence Intelligence said a parade of that magnitude seeks to encourage deserving members to continue soldiering on rendering a sterling service with the understanding of the Code of Conduct and other prescripts which compel our men in uniform to perform their duties.