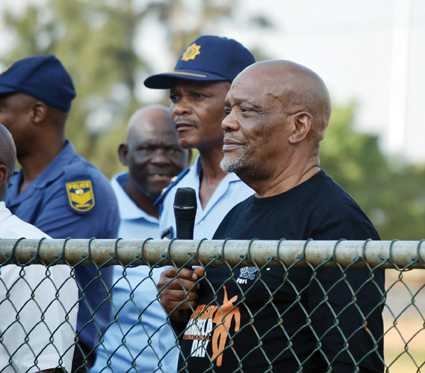 Premier Mokgoro was accompanied by some MECs, ANC NEC member Obed Bapela, IPC coordinator Hlomani Chauke, Matlosana Mayor Maetu Kgaile and some Municipal councillors. It was also the first time that the local councillors whose homes were torched returned back to the township. The meeting that the community was invited to started two hours late. A high number of police officers were around to monitor the situation.

The community of Khuma’s main concern was to get land, to have stands and get to stay there. Led by Khuma Concerned Residents (KCR) they already identified land and started building shacks on an area in Stilfontein, while land was also grabbed next to Ext 8 and 11 in Khuma.

The North West MEC for Cooperative Governance, Human Settlements and Traditional Affairs, Mothibedi Kegakilwe reported that a team was dispatched from the Housing Development Agency (HDA), the National Home Builders Registration Council (NHBRC) and the department to establish the availability of suitable land for housing development in Khuma.

“The team confirmed that of the identified land only 33% of the 110 hectares was not dolomitic, and therefore not recommended for hou-sing development. They performed preliminary screenings on the new land registered under the Department of Public Works and Infrastructure (national).

These preliminary screenings indicated that this land may be dolomite free. “Further tests will be conducted on the identified land through geotechnical studies to determine suitability of the land for human settlements development. The department has mandated the Housing Development Agency (HDA) to initiate the land transfer process with the Department of Public Works and Infrastructure to transfer the land to Matlosana local municipality for purposes of human settlements development,” said MEC Kegakilwe.

Even though the MEC mentioned that there’s still negotiations to be finalized, he promised that there is land that the community can use.
The department said it has set aside R488 765m to build 2360 units and 2360 serviced sites across all municipalities in Dr Kenneth Kaunda district.