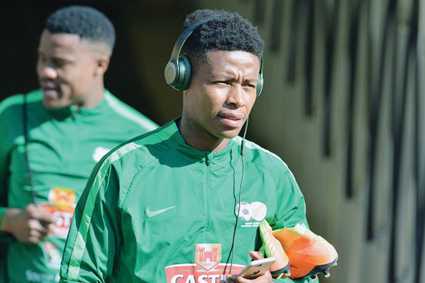 As confirmed by the association on Tuesday 8 October, Brandon Petersen and Thamsanqa Mkhize both withdrew from the Bafana camp due to injuries. It has since been revealed that Bongani Zungu joined the list. Mothobi Mvala from Highlands Park has been called up in the midfielder’s place.

“Mothobi Mvala of Highlands Park has been called up to take the place of the injured Bafana Bafana midfielder Bongani Zungu,” SAFA confirmed on their official website.

“The Amiens FC star is the third player to be withdrawn from the squad due to injury after both goalkeeper Brandon Petersen and defender Thamsanqa Mkhize were replaced by Ricardo Goss of Bidvest Wits and Tshepo Rikhotso of Bloemfontein Celtic.

“Meanwhile Dean Furman and Ronwen Williams sat out the second day of training yesterday as they are nursing injuries - and were joined on the sidelines by striker Lebo Mothiba. The trio is still under medical observation,” SAFA added.

Bafana will lock horns with Mali on Sunday 13 October, at the Nelson Mandela Bay stadium.