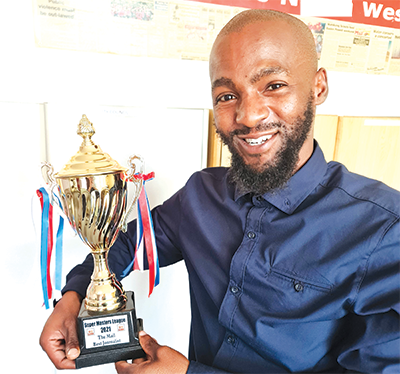 MAHIKENG MAIL-MAHIKENG: Mahikeng Mail’s very own multi award winner and senior journalist was among those who were awarded for excellence in the Super Masters League award ceremony at Montshioa Stadium last weekend.
Teboho Letselela is the youngest Sports Editor of Mafikeng Mail newspaper who has for the past five years dominated the awards ceremonies in the region since his inception in the North West Newspapers group.

His hard work and determination to promote sports has been proven by the number of awards he has so far pocketed.
He has covered a wide of range of sporting activities and events from local, regional, provincial, national and international levels. His expertise has grown enormously as part of him not only promoting sports but unearthing sports talent in the North West Province.
Letselela’s dedication and support in covering sporting events including soccer, tennis, rugby, cricket, bowling and many   other sporting events have shown devotion and the love for sports in general.
Many names have been celebrated because of his efforts for publishing and telling untold stories of sporting events within  North West province communities while his reports have helped many communities to be informed and educated about sporting activities taking place in their province.