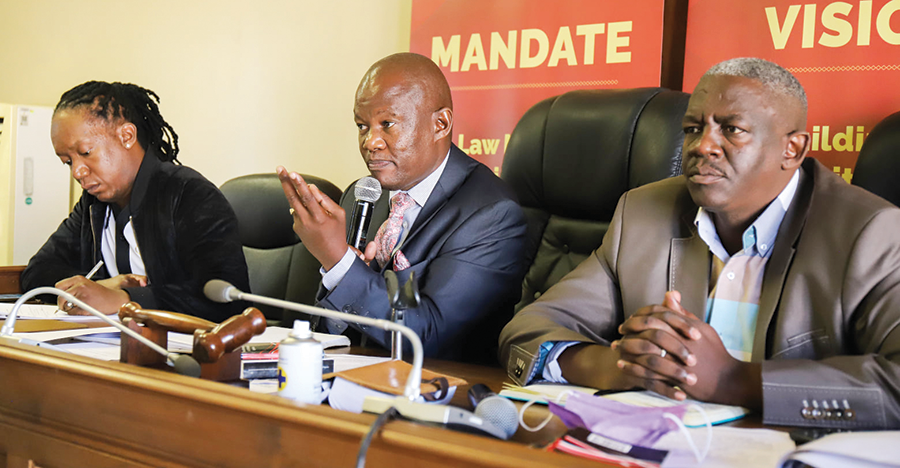 MAHIKENG MAIL-MAHIKENG: The Portfolio Committee on Premier, Finance, Corporative Governance, Human Settlements and Traditional Affair chaired by Aaron Motswana has lambasted the Ratlou Local Municipality for not acting on a Special Investigative Unit (SIU) report that implicated the municipality’s officials including the Municipal Manager, Tebogo Chanda.

The SIU was mandated in terms of Proclamation R23 of 2020 as published in the Government Gazette No. 43546 on July 23 2020 to conduct investigations into allegations and irregular payments of two Personal Protective Equipment (PPE) suppliers at Ratlou Local Municipality during the National State of Disaster.
The SIU found the Municipal Manager, Chanda and two other employees, Mpho Manja the Procurement Accountant and Moitse Ledingoane, the Acting Chief Financial Officer guilty of misconduct for failing to prevent losses by permitting the municipality to procure PPE items at wholly inflated prices; ensuring that the municipality follows Treasury Regulation Circular 100 regarding the pricing of PPE items and to act with fidelity, honesty, integrity and in the best interest of the municipality in managing its financial resources. The report was sent to the Department of Cooperative Governance, Human Settlements and Traditional Affairs with recommendation that council must institute disciplinary measures against the implicated individuals. The municipality was instructed by the Chairperson the committee, Motswana to include the item of the SIU report on the agenda in the next council sitting, which should be before April 22.
“Why would the municipality fail to implement a directive from the Presidency as the SIU investigations were commissioned by President Cyril Ramaphosa? The report was not taken for review by all those implicated and therefore it is unacceptable for the municipality to just sit with it and not implement consequence management. Municipal Council should also have a clear plan on how to recover the misappropriated funds to the latter. If the municipality has a panel of lawyers on its database, they should be formally asked to charge implicated individuals. Municipal Public Accounts Committee will also have to deal with matters of supply chain transgressions,” said Motswana. Cooperative Governance Acting Head of Department, Mamorena Lehoko, confirmed that the department reminded the municipality several times about processing the SIU report. “We wrote several letters to the municipality reminding them to deal with the SIU report at council. Even during the time MEC Moiloa was acting MEC for the department”. Lehoko further said she will bring evidence in the next meeting that the department did remind the municipality about the report. Mayor of Ratlou Local Municipality, Cllr. Matlhomola Ronald Jafta said the municipality will table the report in the next council meeting and will work with all stakeholders including SIU, the Committee and department to ensure that implicated officials are held accountable.  “We will hold everyone accountable who misused municipal funds, and our mandate is to ensure that there is clean governance and we will protect the interests of our people by delivering services. “We have no interest in defending anybody. We have taken note of issues raised and we will comply,” said Cllr. Jafta. Motswana said the municipality should also submit a handover report from the previous municipal council to check whether the SIU report was part of its municipal council sittings and a comprehensive report on the litigation register and how the municipality dealt with close-out reports on Section 139 (1)(b) interventions.
“We also need reports on status of senior managers as there are vacancies; incomplete projects under municipal infrastructure grant from the three  previous financial years and how much was spent as well as service providers involved; irregularities on misuse of petrol cards, and post audit action plan on unauthorized, irregular and fruitless and wasteful expenditure,” said Motswana.