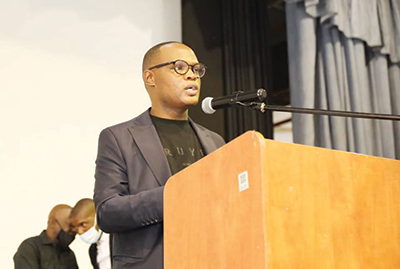 MAHIKENG MAIL-MAHIKENG: The Executive Mayor of Mahikeng Local Municipality, Cllr Tshepiso Mphehlo, officially met with management and employees of the municipality to welcome them back from the festive break and introduce himself and the Mayoral Committee.

The executive Mayor raised issues of low staff moral in the staff complement caused by poor working conditions, poor payment and remuneration, vacant and acting posts, lack of service delivery, poor quality of work, nepotism and corruption.
The Executive Mayor requested employees of the municipality to work together with the leadership to develop Mahikeng and her people, provide services to communities and turnaround the face of the city.
Cllr Mphehlo mentioned engagement that he was having with Cogta and the presidency to lobby national government to assist rebuild Mahikeng.
Cllr Tshepiso Mphehlo further mentioned that the municipality was making plans to acquire a water license, vehicle registration and licensing authority, regain control of Mahikeng International Airport, and acquire the authority to provide housing and electricity to enhance revenue for the municipality.  Among other plans that were been made was to operationalise Mmabatho Stadium and assist small scale and subsistence farmers to grow the economy.
Lastly, the Executive Mayor requested the Municipal Manager to organise Mahikeng Local Municipality Easter Events to revive Mahikeng. He also mentioned that the 60s and Mahika-Mahikeng will be resuscitated working together with Provincial Departments.