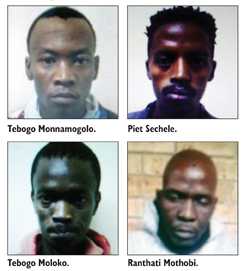 The four men escaped from custody in the early hours of Saturday morning 26 September.

According to Capt Aafje Botma, police spokesperson, it was discovered during routine cell inspection at the station that the four detainees escaped. She said the police are currently busy with an internal investigation determining the circumstances surrounding the escape.

At the time of escape, Tebogo Monnamogolo (31) was in detention for burglary residential, Piet Sechele (26) for murder, Tebogo Moloko (28) for business robbery and Ranthati Mothobi (50) for rape.

Members of the community are urged not to try and apprehend or confront the escapees as they may be dangerous.  Anyone with information is requested to call the nearest police station or contact Captain Ananias Moleki on 082 416 0780.