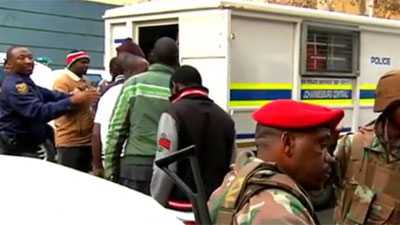 Klerksdorp Midweek, Klerksdorp - Operation Duty Calls/Fiela Reclaim continues to re-assert the authority of the state and to rid the province of crime.

This was demonstrated when 32 suspects were apprehended during operations held between Thursday 12 and Friday 13 November.

According to Colonel Sabata Mokgwabone, spokesperson, the operations were held jointly with Traffic and Immigration Officials in the policing precincts of Boitekong, Mmabatho, Lomanyaneng and Klerksdorp.

“The arrested persons include six that were suspects for assault GBH and assault common, three for common robbery, seven for drug related crimes, one for possession of a dangerous weapon (knife) and another one for malicious damage to property.

It was during these operations that nine fines were issued for liquor-related offences, while five motorists were fined for road traffic related transgressions.”

The arrested suspects were expected to appear in Mmabatho, Rustenburg, and Klerksdorp Magistrates’ Court soon.

“The police seized liquor and dagga during the operations. Meanwhile, the operations also led to searching of 165 premises, 83 vehicles and 508 persons. The operations will continue and will be intensified in various parts of the province to maintain stability and ensure the safety of the community during the festive season as part of Operation Duty Calls/Fiela Reclaim,” he said.