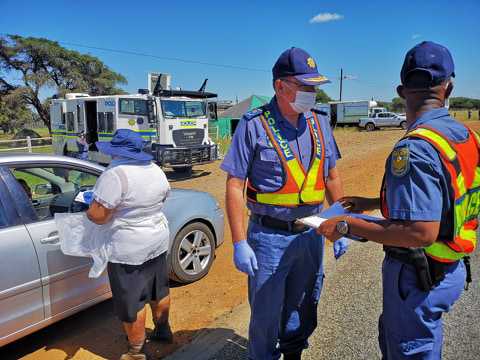 Stellalander-Kuruman - The John Taolo Gaetsewe (JTG) cluster Commander Maj Gen Johan Bean urged all saps members within the district to take drastic measures against those who do not comply with the law during this time of National shutdown. Since Friday (27 March) roadblocks and VCPs have been conducted within JTG.

During these operations road users were checked whether they are complying with the National Disaster Management Act by checking the total number of persons in a vehicle as well as their permits. Furthermore, taxis were also checked whether they operate during the right time frames. Those walking around were also checked. Thus far seven people have been arrested for contravention of the National Disaster Management Act in Mothibistad and four in Kuruman. They were traveling without permits and others walking on the streets without permits and valid reasons. They will appear before Kuruman and Mothibistad magistrate courts on charge of contravention of National Disaster Management Act. In order to ensure that everyone comply various operations are taking place. Gen Bean is also part of these roadblocks and VCPs. On Sunday (29 March) Hon Patricia Peacock from the Police Portfolio Committee and Hon Mpho Tongwane from the parliament joined the roadblock conducted by SAPS, SANDF, Health Department and the Provincial traffic officers. During their visit they distributed Corona virus pamphlets to the road users and interview them to check whether they are familiar of the objectives of the President of the country’s lockdown. “This 21 days of National shutdown the police will enforce and maintain law and order in JTG,” concluded Gen Bean.