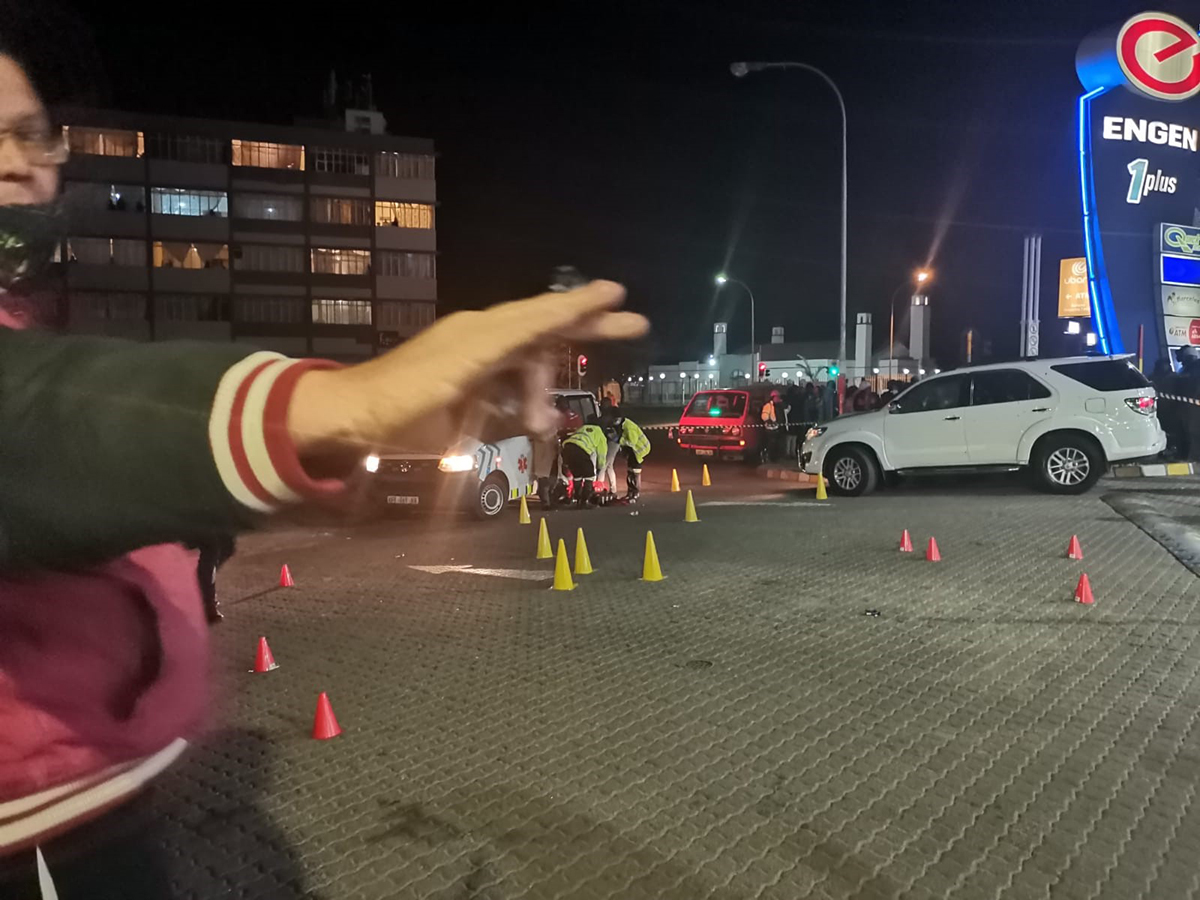 Klerksdorp Record, Orkney - Residents of Orkney are demanding answers from Orkney SAPS regarding their safety after this town resembled a war zone early on Monday evening when gun men opened fire at a busy fuel station, killing three people.

The hit is believed to be a deliberate assassination in an ongoing taxi feud involving the long distance Eastern Cape taxi route. The community fear a taxi war might break out.

Questions are being asked as to why there were no police members at the scene. Shots were fired shortly after 19:00 at the Engen Garage with the gunmen speeding away in a white Ford Ranger. Klerksdorp Record arrived at the crime scene at 19:25 to find members of the AfriForum neighbourhood watch and private security companies securing the scene. There was no visible police presence at that time. Several ambulances were at the scene to provide medical attention to the wounded and a crowd of onlookers gathered at the normally busy filling station. It was chaos.

However, Capt Sam Tselenyane, provincial police spokesperson, told Klerksdorp Record that the police immediately proceeded to the scene after they heard gun shots not far from the police station. “After the shots were fired a man who was profusely bleeding entered the Community Service Centre armed with a pistol. He told the members on duty that he was shot at the Engen garage,’’ he said. According to him this was around 19:10.

W/o Elize Kruger, Orkney police spokesperson, confirmed that there were police officers at the scene and said their vehicle as well as one from Kanana SAPS were parked in front of Ponta de Sol, a supermarket on the other side of the crime scene. In video footage taken by Klerksdorp Record however, no uniformed members can be seen at the scene.

She said the senior police officer on duty, station commissioner Col Hans Badenhorst, as well as the uniform members were inside the convenience centre getting details of the injured and looking at CCTV footage to get an idea of the getaway vehicle to search for the killers.

“The crime scene was a challenge because it was stretched over a large area and crowd control was an issue,’’ she admitted. When more police officers arrived some time later, the crowd was removed from the scene. Klerksdorp Record could not determine how many police members were on duty that specific evening at Orkney SAPS. Questions to that effect were ignored by SAPS. W/o Kruger said the police station has two vehicles servicing the area.

Only a few weeks ago, members of the Orkney community marched to the police station on two occasions complaining about poor service delivery by the police. Issues were that there are not sufficient police officers to maintain law and order in the Orkney Area and not enough vehicles available to service the community’s needs.