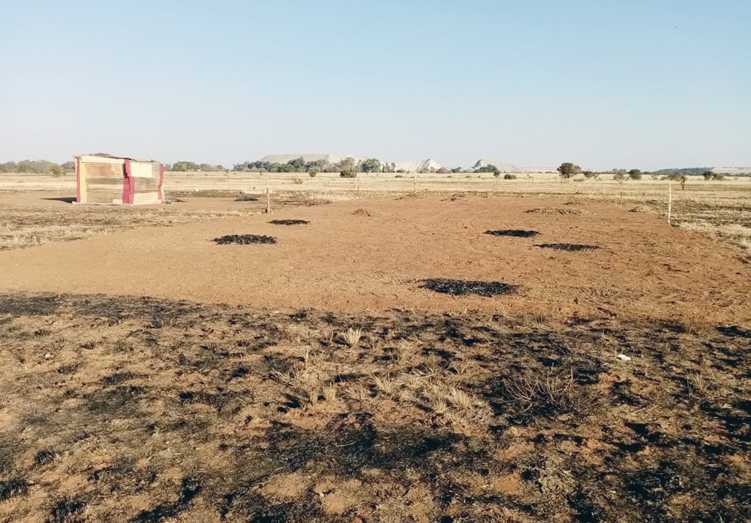 Lentswe, Stilfontein - With the land grab in Stilfontein continuing and some structures even erected on the government owned land, more people have moved on to property owned by Corobrik.

Since last week, residents of Khuma started flocking to land where they started measuring out plots. Where one property belonging to the Department of Public Works was initially targeted, the land grab extended to properties belonging to a non-profit and the City of Matlosana. On Friday 26 July land grabbers moved on to Corobrik’s land.

SAPS opened an enquiry and the City of Matlosana threatened to institute legal proceedings against the occupants but this don’t seem to deter the people of Khuma who say the land was promised to them.

Corobrik confirmed that they have been talking to the municipality about selling the land for four years. Municipal spokesperson Ntswaki Makgetha said: “Council is in the process of finalizing negotiations with Corobrik to acquire the remaining Extent of Portion 2, Farm Hartebeestfontein 422IP from the company. This portion of land measures approximately 88.4911ha, and has an estimated yield of 897 Erven.”

Corobrik CEO Dirk Meyer said: “Corobrik entered into discussions with the Council of the City of Matlosana about 4 years ago. At some stage during these discussions, Corobrik consented to offer to sell Portion 77 of Portion 2 of the Farm Hartebeesfontein 422 to the Council.”

Nothing has been finalised because Corobrik is waiting for a final response from the Council about their intention to purchase the said property and discussions in this regard are in progress.

“The Municipal Manager has on 26 July written to the Department of Local Government and Human Settlement to request that this matter should be granted priority and urgency it deserves so as to ease the pres-sure and stress on the municipality with regard to human settlement challenges.”

Even though the talks are still on, Meyer clearly said: “The recent uncontrolled occupation of this land is not acceptable. We intend to invoke relevant means to ensure that the process of regulated use of this land is properly managed within the applicable laws and with due regard to our property rights.

“In line with the spirit of our previous engagements with the Council, we would appreciate the Council’s involvement in ensuring the orderly management of this matter and also the protection of Corobrik’s property.”

The municipality said: “Council can never encourage residents to occupy any land illegally. We reaffirm our stance that residents be warned at all times not to illegally occupy land in the Municipal Area.

When asked if the people are going to be removed from the land, Makgetha said: “No legal action will be taken at this stage. An amicable resolution of the matter has been attained, to the satisfaction of all parties concerned. Those who have erected any temporary illegal structures like poles, fencing, shacks and other things have been informed to remove their structures and keep the land free of any illegal occupation.”

She continued: “The community has been informed of council’s development plans for Khuma Township, and as a result, have agreed to not occupy any land moving forward.”

“We give a municipality this week to get a response. What we did was just to put the poles after marking our stands, but so far, there’s no shacks and fences there, but we are not taking out those poles,” Porogo said.

Botman said: “After meeting the mayor, we were promised that she will assist us to get that land permanently, so we’ll wait for now. We are not going to remove anything there including those shacks and other things.”

Meanwhile, fingers are pointing at who the mastermind behind the land grab is as weekend newspaper reports suggested local developer Seunkie Ntepang has his eyes on developing the land. Last week he was seen at the site of the land grab saying there is nothing wrong with the situation and that people should get land promised to them.