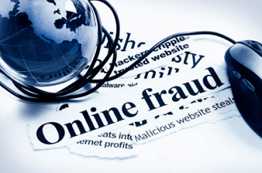 Klerksdorp Midweek, Klerksdorp - Many internet shoppers have been left without their money and the goods they have purchased.

According to the police, several cases have been reported where sellers advertise products to be sold on the internet and a syndicate will then contact the owner telephonically by sending a false SMS notification confirming that the money has been paid in as well as a false proof of payment.

“In other cases, where products were advertised on the internet and the potential buyer sent the money via transfer, deposit or EFT, the client will never receive the advertised product because it never existed in the first place,” said Const Amogelang Mabihi, spokesperson.

“As we are approaching the festive season where cases of this nature become prevalent, the police in Klerksdorp would like to warn the public of these scams. The same awareness goes to people dating strangers on social networks such as Facebook as many people/lovers have been fooled.

For instance, a lover, who in most cases is based overseas, will send his or her partner a gift which will be kept at the airport and the recipient will be expected to pay a certain amount of money before getting their present only to find that the gift never existed.”

People applying for tenders online are also advised to personally go and enquire to the government department or company in question to check whether they indeed advertised any tender.

“They must know the supplier of the products that are needed, the person whom they ordered the products from as various cases have been reported where they deposited the money, a proof was sent by the scammers to confirm delivery of products which never arrived and when the client
enquired he will be sent from pillar to post or even told that the delivery truck experienced mechanical problems along the way so he suspects no foul play and continue waiting hopefully,” she said.

In all these criminal acts, authentic documents reflecting company logos and letterheads were used, including bank letterheads but the police investigation reveals they were fake.