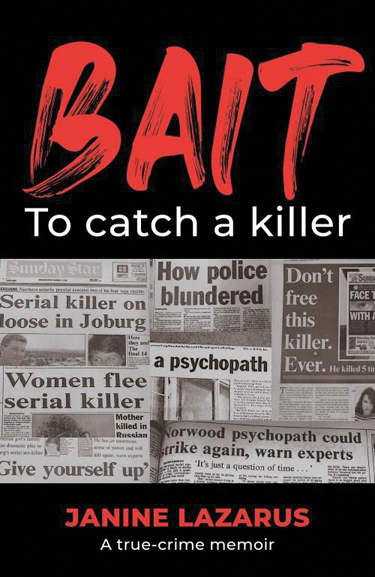 by Janine Lazarus (NB Publishers)
True crime at its best. In the early 1990’s the Norwood Rapist and serial killer was on the loose, sending a suburb of women into terror. In a deadly game of cat and mouse, echoing Clarice and Hannibal Lector in Silence of The Lambs, Lazarus is used by the police as a decoy to hunt the killer who has terrorised the JHB suburb of Norwood.

It becomes extremely personal - the hunter hunting the hunted. Set in the newsroom of the pre-digital era, the story was competing with some of the hugest headlines in our transition to democracy.

Written as a riveting behind-the-headlines true crime memoir with a most unusual twist, the book explores fascinating newsroom ethics and questionable police procedures while delving into the power relationship between a reporter, an editor and a serial killer.

If we are to believe that journalists should shape the news - not make the news - Lazarus breaks just about every rule in the newsroom guide book as she becomes increasingly obsessed with the killer.

About the author: Janine Lazarus made her name as an investigative journalist back in the early 1990’s. One of the most famous cases she reported on was the Norwood serial rapist killer, Kobus Geldenhuys who she became obsessed with. Her memoir tracks this story. These days she heads up a successful communication and media training agency.